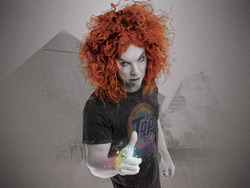 Picking a comedy show to see in Vegas is a daunting task. That’s why we’ve done the research for you—we know you deserve the best while visiting the Strip! So, make your way down to the Luxor and check out Carrot Top, Vegas’s “Best Male Stand-Up Comedian.

This guy is an absolute riot, combining comical commentary on current events with outrageous prop comedy. He’s got a trunk full of bizarre items, including several of his own inventions, which add an extra layer of hilarity to his jokes.

Add in his wacky personality, over-the-top red hair, and the fact that he barely takes the time to breathe between jokes, and you’re in for a show that will have you doubled over laughing from start to finish.

It’s no wonder that he’s been praised as both “Entertainer of the Year” and “Comedian of the Year.” His shows are, quite simply, one heck of a good time. Trust us—you don’t want to miss an opportunity to see this guy in person!
BUY TICKETS