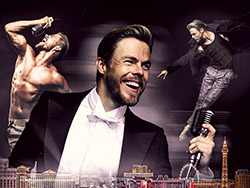 Get ready for a dance spectacular unlike anything else on the strip when Derek Hough: No Limit.  This whirlwind show of fast-stepping talent will not only show you the fantastic expertise of Derek Hough himself, but also the skills of many other featured dancers.

He is an Emmy award-winning choreographer and was the only six-time champion of “Dancing with the Stars.” He has performed at both Radio City Music Hall and London’s West End and is now helping other dancers explore their full potential as a judge on “World of Dance.”

So slip on your dancing shoes and waltz on over to the Venetian for Derek Hough: No Limit.
BUY TICKETS